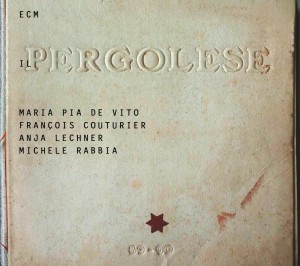 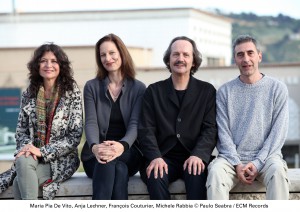 Unforeseen impressions for the listener. As evoked by rarefied sidereal spaces, music gradually becomes perceptible.The first sound is the gurgle of a remote source that awakens mysterious rustlings.Sound fragments crystallized gradually expand, and flashes of notes, as meteors.The sound of a voice becomes clearer, gradually acquiring color and smoothness.
Pergolesi's music emerges; it becomes increasingly recognizable until it turns into a prayer raised above earthly experience,lost in a supersensible dimension…This music, in which different styles blend together, cannot be exactly defined. It would probably be limiting to call it experimental music,since the material sound, both vocal and instrumental, is treated with uncommon sensitivity, competence, intelligence, elegance of style and also technical expertise.Those who listened to a recording would not know for sure how to distinguish the suggestive effects that the percussionist produces with the most curious objects. Music can actually stem from countless sources. It may be, as in this case, not from yesterday or today, but sounding like an omen of the future.The audience, which long applauded, certainly understood.
(Augusta Franco Cardinali)

Commissioned by Fondazione Pergolesi-Spontini for the omonimous international festival in Jesi, the project o was presented in Teatro Spontini in September 2011, under the music direction of François Couturier. The harmonic and formal re-readings and the instrumental textures of Couturier, French piano player and composer rich in insight and open-mindedness (Tarkovsky Quartet, Anouar Brahem Trio,), stimulate the encounter of four individualities grew in different lands of experience: the unmistakable phrasing and sound of the German cello player Anja Lechner, co-founder of the Rosamunde Quartett, valuable soloist both in classic and improvisational music (Misha Alperin, Dino Saluzzi, Vassilis Tsabropoulos); Michele Rabbia, versatile musician and in constant progress in his research on the thousands of possible sounds and in his electronics elaborations, endowed with a delicate and introspective sensitivity which makes him virtually able of playing in a whatever music context (Louis Sclavis, Matmos, Marylin Crispell); and Maria Pia De Vito, jazz singer ever attracted by the infinite sound possibilities of human voice, whose fields of interest are focused both on experimentation and on the research on ethnic, baroque, electronic music, as well as the song form in its every declination (Ralph Towner, John Taylor, Steve Swallow).
Pergolesi becomes a field for different procedures and varied grafts, for an improvisational dialogue between the voice and the cello’s voice, among acoustic sounds, rhythms of drums and metals, and an aerial and concrete electronics, which elaborates both natural and synthetic sounds. Opening the frames of lyrical pages from the Stabat Mater, dances and instrumental tunes, searching for a still-to-be tradition.